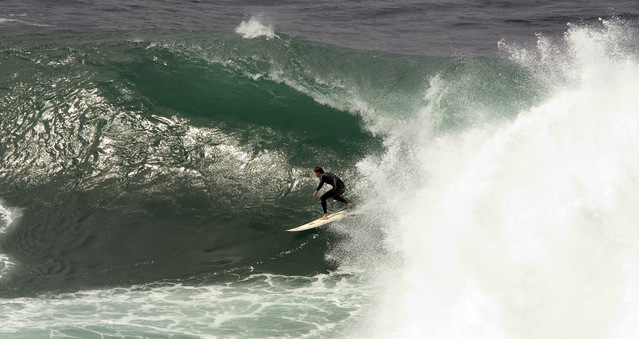 A couple days ago, big wave surfer Paige Alms was talking about concussions and brain injuries on the waterpeople podcast 1. She inspired me to share my knowledge and to introduce some effective treatment options for injuries to the brain, head and neck.

My research led to many stories about big wave surfers struggling to recover from serious concussions and traumatic brain injuries (TBI). Mercedes Maidana got hit by her board in the forehead, Shawn Dollar broke his neck on a boulder under water, Jeremy Flores hit the reef, 15-year-old Harley Taich was smashed onto hard-packed sand and Owen Wright barely survived a wipeout at pipeline with a brain bleed and a concussion. The list could go on and on; for most of the injured surfers the healing process is very challenging and takes month if not years.

You do not need to be a pro-surfer riding the biggest waves out there in order to get serious traumatic impacts to your head, neck or chest. All surfers are risk-taking athletes and often get hurt in the process of expanding their personal limits. If you are in the wrong spot at the wrong time, even a medium-sized Maui north shore wave will teach you a lesson your body will not easily forget. In 2015, Christian Swinney surveyed recreational surfers across the US2: 70% reported minor to severe head injuries. Most often these injuries get downplayed and people are not aware of how much their brains actually suffer over time. Long-term effects of traumatic impact on the brain are still being investigated. We have learned from professional boxers that repeated concussions most likely lead to early dementia, Parkinson’s disease and depression. In the last few years, NFL Football Players have created a lot of awareness for the “Posttraumatic Concussion Syndrome” and made the world more familiar with the challenges of the long-term effects of concussion injuries in daily life.

Signs and Symptoms of concussions
It is important to know, that you can injure your brain without losing consciousness. Headaches, fatigue, irritability, dizziness, brain fog, slow reaction times and sleep disturbances are common symptoms associated with mild concussions. Injured athletes get advised to physically and cognitively rest and to avoid alcohol and sedatives. It is best to limit any activity that requires concentration or attention. Your brain will thank you for not driving, watching television, playing video games, texting or reading. The symptoms of a concussion often do not occur right away and then seem to disappear within a few weeks, if the impact was not too severe. According to my clinical experiences rest alone is not enough after a traumatic impact. The traumatic energy gets locked into the tissues of the body and will over time cause lasting long-term symptoms; they often appear to be more generalized and distant from the location of the actual impact. With every new trauma those locked-in energies get reactivated and can cause even more challenges for brain and body.

Consequences of traumatic impact
There is a lot of physics involved in understanding how traumatic energy affects our bodies. The most important fact is that energy cannot be destroyed. Energy will not just disappear; it will most likely get transformed into movement, deformation and heat. The heavier an object is and the faster it moves, the bigger the impact upon collision. We all learned “Momentum equals mass times velocity” (p = mv). Acceleration and inertia, as well as the angle and the location of the impact will help decide how severe an injury will be. The harder the surface and the shorter the time of impact, the larger the damage to the body. Helmets try to protect us by prolonging the duration of the impact. Falling onto grass hurts less than falling onto concrete. With a certain amount of speed, the surface of the water seems to be even harder than concrete. What we first notice are open wounds, painful contusions and swellings – the primary lesions at the location of the impact are hard to overlook. But there is way more happening hidden from our eyes! Every traumatic impact creates a mechanical wave, which will propagate through our body into different depths and directions, from tissue to tissue, until its energy dissipates. Every time the impact wave travels through a different tissue density it loses energy and the body absorbs some of it. Energy travels well through bones – they often break at the opposite end of the impact, where the effect of the force finally accumulates. Dense tissues transmit energy better than soft tissues. In other words, the soft tissues absorb most of the energy. Structures like brain, organs, nerves, muscles and ligaments have therefore a higher risk for micro-tears and scar tissues. Kinetic energy is remaining in the tissues of our bodies and will over time cause dynamic changes. Days or even weeks after, secondary symptoms will start to manifest. The healing process all of a sudden gets even more difficult.

Effective treatments for concussions and head injuries
In 2017, one of my teachers conducted a study on 11 retired NFL and CFL Football Player’s who were diagnosed with Posttraumatic Concussion Syndrome. Gail Wetzler and her team3 wanted to evaluate the effect of three gentle but specific manual therapies, which are capable of accessing and addressing structural, vascular, and neurologic tissues of the cranium and brain. Craniosacral Therapy (CST), Visceral and Neural Manipulation (VM and NM) are able to address chronic symptoms and far-reaching ramifications, which manifest throughout the body after trauma. These modalities were used in the attempt to improve immobility, pain intensity, sleep disorders, cognition and quality of life. Each patient received ten 2h-sessions. Symptoms were reevaluated after each session and 3 months later, there were statistically significant improvements on all levels: Overall pain and pain emanating from the neck decreased, average reaction time and memory improved, cervical range of motion got better and sleep improved remarkably – 2 hours more after the first day of treatment and up to 4 hours more after 3 months.

Gail Wetzler’s study shows that even years after concussions left their imprints in our bodies and brains, Craniosacral Therapy, Visceral and Neural Manipulation can help the recovery process and improve the life quality in people with Posttraumatic Concussion Syndrome.

I personally believe that releasing unwanted traumatic energy from a person’s body will help to improve the function of our brain and nervous system and hopefully prevent future long-term effects like early dementia, Parkinson’s disease or depression.

The French osteopath Jean- Pierre Barral, the founder of VM and NM, always reminds us practitioners that it is very important to listen to the tissues of the patient. Cells remember every single trauma of our lives, people sometimes forget. The body always tells the truth and guides us to the most challenged areas – which often are not located where we expect them to be.

Photo by Peter Smith from FreeImages